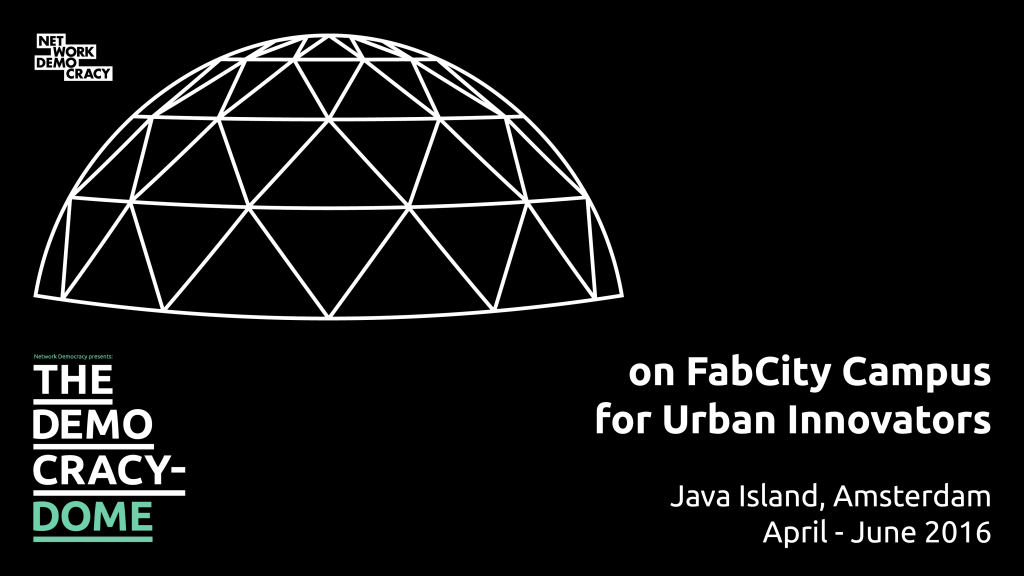 In 2016, the Netherlands will be responsible for the presidency of the European Union. This means that in the first half of the year meetings with ministers and officials from all European member states will take place. These meetings will be held at the Marine Etablissement in Amsterdam.

In this period, Netwerk Democracy in collaboration with the European Cultural Foundation (ECF) will organize a public program as part of Europe by People. The program will consist of two parts: a program series ‘New Democracy’ at Pakhuis de Zwijger, and a campus program at the FabCity Campus.

From 20 January onwards in Pakhuis de Zwijger, Netwerk Democracy together with the ECF will organize a series of evenings on current changes in European politics and democracy. The evenings will discuss themes such as transparency in the government and new forms of governance.

Central to this series are the bottlenecks encountered in every major European city. For example, many European cities start to lose their cultural identity because of gentrification and commercial interests. In addition, as citizens, we increasingly lose public space to the government and, thus, we collectively have less trust in this government. These kinds of bottlenecks put pressure on the legitimacy of our democracy, which leads to an increased demand for a new way to organize democracy.

On the basis of various theme evenings, we look for answers to the question of how we can organize this new democracy. We invite speakers from different angles to talk with us about how we can best address issues such as urban planning, cultural and community initiatives, protection and preservation of public space, and participatory governance.

Netwerk Democratie at the FabCity Campus

The FabCity Campus is also a part of the Arts and Design project of Europe by People and it will act as a breeding ground for innovative ideas around European cities. The goal of this program is attracting a wide audience where scientists, ministers, and students are warmly invited to attend specific events. A number of working spaces will be set up on the campus in order for the program to continue not only during the weekly evenings but also during the day. The campus will be comprised of a wide variety of working spaces, where start-ups and large companies are encouraged to work side by side.

Together with Ehsan Fardjadniya we are building a dome where all of the campus will be in attendance. In addition, we will be partnering with Hogeschool van Amsterdam and Amsterdam University College among others in order to set up other interesting programs.