This interview was first published in our Digital Democracy guide

[In this text we use “PB” as the abbreviation for Participatory Budgeting.]

Can you tell us in short what PB Scotland is about?
PB Scotland was set up as a sharing and learning network to share lessons and capture learnings from PB initiatives around Scotland. They bring people together for learning events, focusing on specific issues within the roll out of PB in Scotland and host national and international conferences. PB Scotland has also been resourced to directly support PB process in Scotland’s communities, both those led by communities themselves and by local authorities its website is a platform for updates on events, contains toolkits, policy and profiles good examples of PB and is visited by an average of 1,500 unique users per month.
Central to the website is the PB Charter. Developed with PB practitioners across Scotland, the PB charter describes seven features that really matter when using PB processes, they need to be:

It is crucial to involve communities and to focus on topics that really matter. An agreement like such as the charter can really evoke effort and action. On the other side, if PB is just being used as a technocratic process it has the opposite impact.
Furthermore, Scotland is in a unique position because the Scottish Government have funded a supporting infrastructure for PB. COSLA, a membership body representing local governments in Scotland, has been funded to have four posts to support work on digital PB, inclusion and training. The Democratic Society in Scotland has been funded to help Scotland develop the tools to support online and in person PB. The Church of Scotland supports a network of churches and community organisations delivering PB, often in areas of highest deprivation. They developed an excellent, accessible PB film which has been really useful in creating understanding in Scotland.
We have heard that local communities in Scotland need to spend 1% of their budget on PB. How does this 1% rule work?
Well this is not an obligation but rather an agreement. The idea is that by 2021 1% of Local Authorities budget in Scotland spending is subject to PB, with some caveats. This agreement was made by the Scottish Government and COLSA. The purpose is to drive the active participation of citizens in local decision making and go beyond the current arrangements for consultation and engagement.
A target like this can be a good way to provoke and motivate action. One worry however might be that this leads to initiatives designed to meet that target rather than to use the values of the PB charter and actually increase meaningful participation, or share power with citizens; tweaking consultation but with a different name. We want to avoid a situation where we meet the target but miss the point.

What are really good PB practices according to your experience?
Glasgow recently did a major PB process on tackling of poverty and inequality. Four areas experiencing some of the highest levels of deprivation were involved. What was really impressive was that local community groups were commissioned to host these processes within the communities where they had deep roots, and that citizens panels were recruited and supported to deliberate and make decisions on how the process worked. It was also impressive that there was an evaluation approach in which they look back and assess the process and outcomes.
I also really like Leith Chooses, a partnership approach between citizens, community councils and the local authority and its elected councillors which shows how local democracy can realise national priorities.

How are learnings captured? Do people really share their experiences and build on earlier pilots?
Well there is support available and there is the infrastructure. Some Local Authorities use the available tools and learnings on the website whilst others don’t. As said Glasgow and North Ayrshire are some good examples of doing PB with communities, not all approaches are as citizen-led. Angus Council is also one of the partners in the Like! project where it shares its many practices in PB projects.

What is your opinion on online and offline involvement?
One thing is clear as PB develops and online tooling develops: the combination of on- and offline is a must have. The challenge is how to ‘replicate’ the engagement and collaboration you have at events and how people form relations there. An interesting development is in the future the online platform Consul. However there is still a world to win in online!

– In Brechin, PB events have been running for 3 years (2015 onwards) and 31 projects have received funding so far.
– In Montrose, 11 projects received funding in 2018
– In Edzell, 9 projects received funding in 2018
– In 2018, to mark the Year of Young People 40.000 Pounds was set aside for youth work projects. Over 1100 young people voted and 15 projects across Scotland were awarded funding.
– By 2020-21, Angus Council will look at mainstreaming PB as all local authorities have to spend at least 1% of their budgets through the PB process. In Angus, Scotland this equates to 2 million pounds. 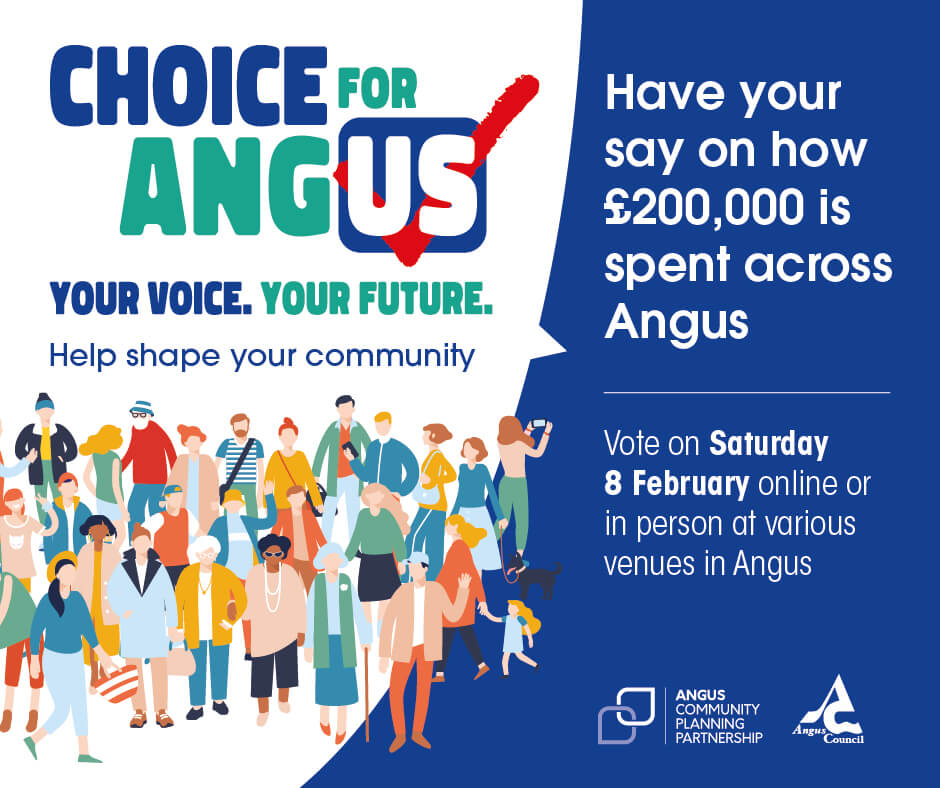