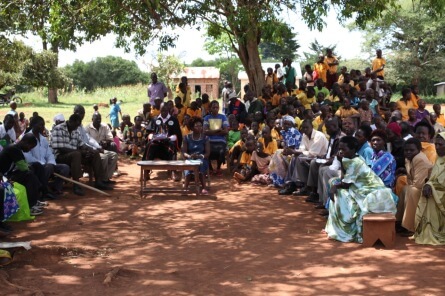 For several years Netwerk Democratie, along with its collaborative partner Ugandan CEW-IT, has been involved in Oxfam Novib’s emotive exchange program.

Emotive makes it possible for organizations to work together. Exchanging knowledge, building expertise and learning from each other is central to this endeavor.

CEW-It is an interesting partner for Netwerk Democratie since the Civil Society Organization (CSO) sets up projects with which they try to make Ugandan citizens play the central role in their democracy and thus in the democratic decision-making process. Initiatives such as the Citizens Manifesto and the Neighborhood Assemblies are a key source of inspiration for new projects of Netwerk Democratie.

In the recent years, CEW-It has made an active contribution to the meetings organized by Netwerk Democratie, including ‘Crowdsourcing the Consitution’ and ‘Borders to Cross’. In January 2015 the team visited the Netherlands again to give a workshop.

A team of Dutch organizations went to Uganda for a working visit from November 22nd to November 29th. This team consisted of: Pieter Rozema (KNHM), Pat van der Jagt (Alterra), Sandra Bos (HvA), Joachim Meerkerk (Pakhuis de Zwijger), Wim Hiemstra (ETC), Mellouki Cadat (Movisie), and Josien Pieterse & Yvette Jeuken of Netwerk Democratie (the organizers of the working visit). The knowledge they gained as a team is used for a project that is carried out here in the Netherlands: Who determines the Agenda.

Click here to watch the video of our trip to Uganda.

In January 2015, two team members of CEW-IT visited the Netherlands in order to see how the knowledge from Uganda is used in the Dutch context. Watch the video of both visits here.

This project is made possible by the European Commission