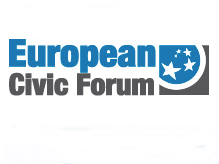 The European Civic Forum (ECF) is a transnational network of more than 100 organizations and NGOs from 27 European countries, working together on issues such as citizenship education, protection of human rights, and strengthening and innovating democracy. Netwerk Democratie serves as a board member within this network.

The objective of the ECF:

Economic cooperation between the EU countries is central to the ‘European project’. This happens at the expense of the focus on democracy and solidarity. These two aspects of cooperation that have been laid down in European treaties can significantly close the gap between European citizens and European institutions. NGOs and civil society organizations play a crucial part here since they stimulate public debate and develop projects and initiatives that meet the needs of European citizens. These organizations connect communities while dedicating themselves to inclusion and social innovation both on national and transnational levels. Organizations that are committed to equality, solidarity, and democracy play a key role in monitoring policy, as well as, increasing of democratic participation opportunities for citizens. As a result, the interests of citizens are also taken into account in political decision-making. The ECF is committed to bringing the role of civil society to the attention of European institutions and to advocate for social justice at the European level. The Forum is thus committed to creating Europe where access to education and culture is guaranteed, and in which human rights and cultural diversity are protected.

Since the establishment of Netwerk Democratie, the organization has been a board member of the ECF. Through the ECF, Network Democracy indirectly participates in a lobby for more democracy and solidarity within the EU. In addition, the ECF network offers interesting opportunities for collaboration and knowledge exchange.

The ECF was closely involved in the organization of the international conference Borders to Cross, and Netwerk Democratie visited various conferences, meetings, and festivals in Europe organized by fellow board members.

Within the European presidency framework, the ECF, Netwerk Democratie and Pakhuis de Zwijger will organize the ‘European Civic Days’ in Amsterdam. They will happen in Amsterdam on May 29-30 2016. More information about this program will be announced shortly.