Step 1. Intake & defining the question
Colleagues within the municipality that want to involve citizens in their projects can turn to OpenStad for support and expertise. The OpenStad team does an intake and together with them maps out the question, the process, the target group and the degree of influence. Can online participation add anything? An estimate is made of the work.

Step 2. Assessment of needs
A small-scale or more extensive research is conducted into the needs of residents, so that the online tool fits with their questions and motivations.

Step 3. Matching the question with the tools
An assessment is made of the extent to which existing tools match the demand, the process and the desired digital interaction and influence. How much customization is needed?

Step 4. Customize the tool
A tailor-made tool is made for the project in which existing ‘Lego pieces’ of functionalities are deployed or a new customized functionality is built.

● Learn by doing, testing and improving.
● Focus on the users.
● The objective is to improve interaction with the municipality and enhance the influence of citizens in local decision-making.
● Communicate clear rules for participants.
● Participation is always connected to decision-making.
● Online and offline resources reinforce each other.
● Participation tools that are created by Amsterdam are scalable and reusable by others.

The municipality of Amsterdam has deployed digital tools in all sorts of projects, such as online voting for projects in public space, online design competitions, agenda-setting tools for local district committees, co-creation of a neighbourhood vision, or drawing up an action plan with an online interactive map. OpenStad also supports participatory budgeted projects in the various city districts. In 2019, 52.000 people in Amsterdam budgeted 1 million Euros online in three districts. The turnout for the participatory budget was between 18.7 percent and 13.2 percent of the number of people allowed to vote.

In neighborhoods with a low education level additional measures were taken to adjust the online platform to local needs, for example by making the website multilingual and adding the functionality to share an idea via a whatsapp voice message. Additionally civil servants with tablets went into the neighborhood to different public places where they supported residents to learn about the platform and participate. 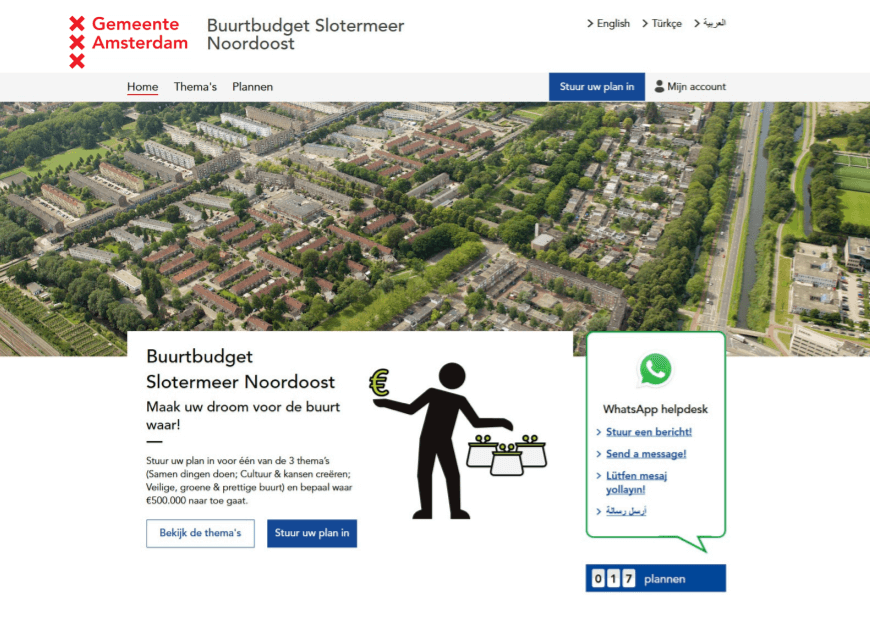