Throughout history, extreme social polarization seems to be the root cause of democratic breakdowns. Today again, states, regions and communities separate increasingly into socially divided bubbles. To what extent can we reconnect through democracy? A report of our recent New Democracy session, on ‘Overcoming Social Division’, 6 September 2018 in Pakhuis de Zwijger.
Written by Rimma Samir. 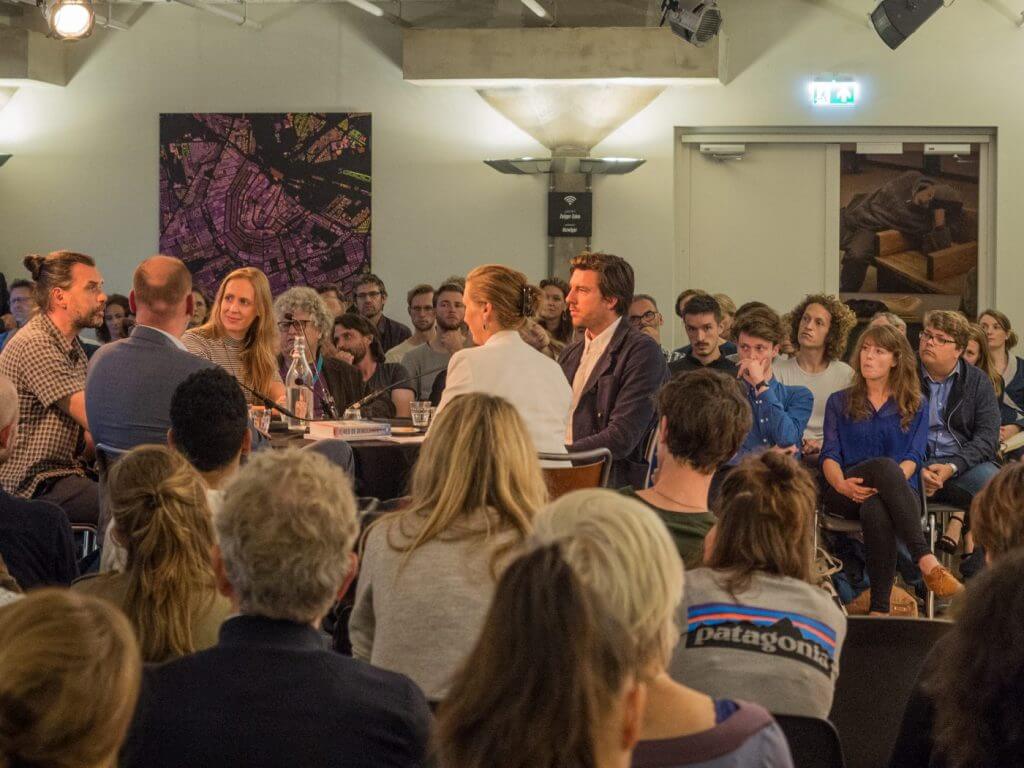 Overcoming Social Division
In recent years, social divisions which bring about increased polarization within citizenry have become a dynamic experienced all over the globe, with examples like Brexit and the 2016 US elections being most glaring. There is an increasing need to democratically overcome these divisions and bring the conflicting groups together at the negotiation table. During the thirty-first edition of the New Democracy series of talks held at Pakhuis de Zwijger, the panel speakers along with members of the audience thoroughly investigated this topic in order to uncover the underlying causes of increasing social divisions and to discuss in which ways peaceful and productive coexistence of opposing groups can be realized.

The keynote speaker of the evening was Dr. Anatol Itten whose recently published book Overcoming Social Division tackles questions of public conflict resolution and specifically how it can be incorporated into public policy design. Dr. Itten presented the key insights and findings from his book, which gave way to a fruitful discussion about what can and what should be done in order to resolve the growing issue of social division.

Frustration, Disconnection, Fragmentation
In order to resolve any problem, it is first important to specify its causes. Therefore, as a keynote speaker, Dr. Anatol Itten started his presentation with an explanation of where social division came from. To begin with, increasing frustration with inequality, climate change, and a general sense of hopelessness, among a multitude of other issues, which have been bottling up among the citizens and were previously, to a large extent, suppressed, were singled out as the first cause of growing rates of social division. This leads to an increase in the second social division cause – a disconnection between people and the democratic system. For instance, as seen from Dr. Itten’s research, more and more citizens, especially the younger generation, become increasingly more cynical about the value of democratic processes and procedures since it may seem to them that nothing that they do can have a direct and visible influence on society as a whole. People in disrupted societies feel alienated, almost as if they were strangers in their own societies.

Manu Claeys, chairman of stRaten Generaal and the author of Red de Democratie (Save the Democracy), shared this view by stating that it is becoming more difficult to find candidates for political lists because becoming a politician has gotten such a bad reputation. Due to the increasing aversion towards politics, it has also become increasingly difficult to develop policy, which would account for the interests of all social groups. Finally, by giving Dutch and American examples of how people tend to move to areas where neighbors would share similar voting preferences, Anatol Itten showed the second component of increasing social division – fragmentation. The increasing political homogeneity of neighborhoods leads to a certain lack of interaction with individuals whose views diverge from one’s own, which in turn decreases the extent of democratic discourse and exchange on the neighborhood level. In order for social conflicts in divided societies to not escalate into instances such as Brexit hate crime, it is hence crucial for politicians and decision-makers to find solutions to the increasing social division.

Blind spots
Before moving on to discussing what kind of methods could be used in order to improve social cohesion, and, hence, improve the state of today’s democracy, Dr. Itten pointed out that there exist a multitude of blind spots for the politicians, decision-makers, and mediators when it comes to conflict resolution. Dr. Itten listed four potential blind spots in particular that ought to be taken into account when solving social divisions/conflicts, those are:

Social potential of conflict
“[N]ow mediators agree that they have never seen such increased degrees of polarization in the society. It is a moment in time where this can be put attention to and democracy can be transformed into something better. – Anatol Itten.”

Nanke Verloo, assistant professor of Urban Planning at the UvA, argues that although there are many potential dangers that come with social division and conflicts that arise from it, the moment of social polarization between citizens and the government has a significant engaging capacity. This capacity, if actively pursued, can lead to considerable opportunities for democratic development. However, in order to make use of the engaging capacity that pertains to public conflicts, it is crucial to include all the groups affected by them.

Inclusivity is an issue that is as challenging as crucial to making the political processes and decision-making representative. The speakers at the panel agreed on the fact that social disruption, conflict, and clashes with each other are all parts of a healthy democracy since they provoke democratic discourse. However, Nanke Verloo pointed to the importance of not moving away from the particulars in favor of generalizing the issue in order to cover the public relevance. In order to improve the potential of democracy in social division resolution and make people not feel alienated and engage in participation, it is important to take into account and talk about specific instances and specific people. Therefore it is important to make a thorough analysis of the people affected by some issue, policy, or project. It is crucial then to ask those individuals to point out not only what affects them but who else should be given a seat at the negotiation table.

In order to engage more people in political processes, the speakers agreed, barriers to participation should be as low as possible. This way of hearing and listening to the untold stories of those who would otherwise not be included in the process will allow for a higher degree of inclusion. Moreover, speaking from his own experience, Manu Claeys pointed out that simply casting a vote is not enough since it is not productive for society. That’s why it is important to keep inventing and enlarging the repertoire of methods for citizens to be active outside of the established procedures.

One way in which politicians and decision-makers can engage more people in these processes, is equipping street-level bureaucrats with a mandate that would give them the capacity to negotiate and improvise instead of just referring people back to the office. This, as Nanke Verloo argued on the panel, would make use of the two types of knowledge that civil servants, who know a lot about affected groups, have. Rutger Groot Wassink adds that in order for the political participation repertoire to be enlarged there needs to occur a paradigm shift in the attitude of civil servants. Their attitude should be reoriented from acting according to fixed and reliable standards to being able to improvise more.

All in all, finding methods of tweaking the functioning of democracy is complicated and challenging. However, given the increased levels of division and polarization societies in the West are experiencing now, it is important to keep looking for ways in which it can be improved.